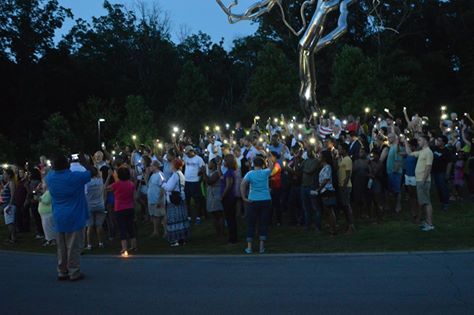 Last week, our hearts were broken.

In response, my friend Wanda organized this silent vigil in our community for the victims of the Emanual AME Church shooting.

Wanda has two daughters, ages 12 and 14. They’re learning what it means to be black in America. They’re black, so there’s that, and then there’s the bigger picture Wanda is helping them understand.

More to teach everyday, no doubt. It’s hard to be a parent.

Ruby Bridges made history. Many of you know the story. Six-year-old Ruby was one of the first black children to cross the lines at an all-white school in New Orleans to claim her right to an equal education in the public school system.

U.S. Marshalls escorted her & her mother to the classroom that first day amidst rioting protesters, including one woman who put a black baby doll in a makeshift casket and shoved it at Ruby as she walked by.

Ruby was brave, no doubt about it. But when I saw this picture all I could think was how much courage her parents had, how deep their conviction and love must have been.

Her mama probably didn’t sleep much the night before. She likely ironed and starched that dress until it could stand up by itself. There may have been a petticoat, given the same care.

The little white anklets, perhaps with flowers embroidered on them. The patent leather shoes, polished until light bounced off them at every step. The bow pinned firmly in the hair.

When I picture Lucille Bridges, I see a woman who believed in what she and her baby girl were about to do. Ruby was going to shine, inside and out, as she changed history.

And she did change it. Today, countless doors have been opened for children everywhere, and each of us has benefited at one point or the other from the education they’ve earned.

All in my lifetime

Ruby’s story never would have happened if it hadn’t been for Abon & Lucille Bridges, her parents. I wouldn’t care so deeply if not for my parents, who raised three children in the turbulent ’60s and taught us about equality and justice as best they could.

We stumble through, work together and listen to each other.

That’s all anybody can expect, to teach the best way — and words — we know. Perhaps down the road we learn our lessons were somehow off the mark. Yet we stumble through, work together and listen to each other.

I’ve kept my heart, mind and eyes open for increasing understanding because of the foundation my parents laid. Whatever mistakes they may have made, at its heart, their message was right. They believed in equal opportunity. They saw people as individuals with value. They recognized the problems and knew the solutions were bigger, but would take time.

It’s hard to be a parent, but you make a difference. May it change your child’s world, and that of those around you, for the better.

8 Replies to “hold your child’s hand, talk a little longer”