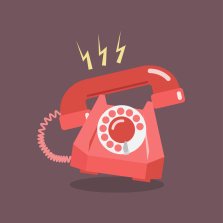 Once, many years ago, before cell phones but after we all got answering machines with caller ID, someone dialed my number by mistake. I don’t remember the details exactly, but the gist of it was some man who’d planned to meet his buddy couldn’t make it and wanted to reschedule. Good Samaritan that I was,  when I heard the message an hour or so later, I called back the number that popped up on the caller ID to let the guy know he’d dialed the wrong number.

Problem was, he didn’t answer. A woman, presumably his wife, did. I explained the reason for my call, but fumbled when my kind gesture was met by stony silence. After repeating myself several times (why, oh why did I do that?), I hung up.

Since that time, I’ve left well enough alone when someone calls me by mistake. It doesn’t happen too often, but a few days ago I received a message from a man who was quite anxious to talk to his friend. Not in a frightening way, like he was incredibly angry or, worse yet, suicidal, but clearly this conversation was important to him. Still, I didn’t call back. Phone safety is a tricky thing and I only talk to people I know.

An episode of Frasier dealt with this issue of helping strangers in its usual comic way some twenty years ago or so, only Frasier ended up in the police station, busted for solicitation of a female impersonator. Of course the show didn’t end there and Frasier ended up continuing with his practice of kindness to strangers.

As do I. One suspicious wife isn’t going to stop me from helping others. However, now that I’m older and wiser, I do put my own safety first. It doesn’t mean I couldn’t be hoodwinked by someone who knows X number of people will help a child in need, but I take care. It’s sad to me that most of us are cautious when it comes to helping those we don’t know, but that’s the way it is.