I fully appreciate my God-given talents. I was born, it would seem, with an ability to write well, something I’ve tried over the years to cultivate and focus. I’m an excellent knitter, decent seamstress, and have a creative eye for decorating. Nothing I’ve turned into a career, nor would I want to do so, but it makes my home a happy place to be.

One thing I cannot do, no way, no how,  is carry a tune. I am one of the tiny percent of people who simply have not an ounce of musical talent. It makes church services a little long sometimes, because I rarely even try to hum along or mouth the words. Yes, I have my favorite hymns, and I do chime in with those, under my breathe. If you start playing “Great is Thy Faithfulness” I will be compelled to pretend I’m singing along with you.

And my cats put up with me around the house. What choice do they have? Each has his or her own song. For Walter, it’s “Walter Kitty, You’re the One” sung to the tune of “Rubber Ducky, You’re the One,” and for Mimi, it is “You are My Sunshine.” I can almost get by with that one, and she knows it’s her song. She’ll sit closer to me and snuggle in.

For the late great Paco, I had a handful of old country classics I’d sing as I held him, and he burrowed into my shoulder and purred as I would murmur, “You Don’t Know Me” so softly, only he could hear it. I think the tune comforted him, as did being held. 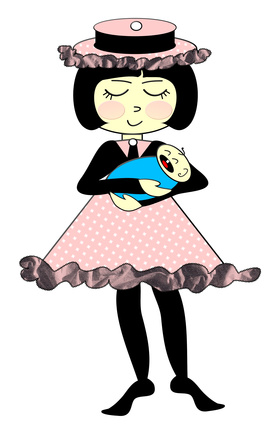 Years ago I got trapped into working in the nursery at my church during the Kid’s Christmas Pageant. As you might imagine, a lot of the parents who normally would have taken on that job had older children, or even nieces, nephews and neighborhood friends, performing as sheep and angels and what have you, so they wanted to be in the service, The church was recruiting those of us old enough to have done our share of babysitting, yet young (or unattached) enough not to be too concerned if we missed the children’s performances, to assist with the wee ones.

As soon as a I entered the nursery, I was handed a screaming eight-month-old. Normally the policy was to retrieve the parents if the crying persisted, but the ladies in charge knew this little guy had an older sister making her stage debut, and felt it was best to wait it out. Powerful lungs, he had, and nothing I did helped.

He still cried, but wouldn’t let anyone else take over. This was a conservative church, the kind where you didn’t advertise you’d ever listened to Loggins & Messina, let alone attended movies like Footloose or Dirty Dancing. I didn’t tell his parents what I’d been singing (my guess now is they wouldn’t have cared), but thiry-plus years later, I wonder, what does that little boy, now a grown man, think of if and when he hears that song?

Does it bring him an odd, unidentifiable kind of comfort? Does he sing it to his own kids for reasons he can’t explain? Or has he completely forgotten everything about that evening and being carried for nearly two hours by a college student who felt helpless against his tears?

Songs are powerful, so is a hug. I pray that eternal life brings with it a greater ability to express myself through music, but in the meantime, I’ll keep writing. And humming just a little…